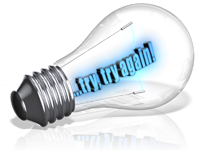 “If at first you don’t succeed, try, try again.”

Like most of us, you’re probably familiar with this phrase… but if you’re wondering about the validity of the statement, or about the value of persistence, then read on.

Babe Ruth was the home run king with 714 home runs to his credit. What few people know is that during that same time period he also held the record for striking out at bat more than anyone else with 1,330 failures.

R.H. Macy failed seven times, before his store in New York caught on.

Author J.K. Rowling had her Harry Potter manuscript rejected time after time. Today, after successful books, movies, toys, clothing, etc., she is one of the world’s richest authors with a net worth of $1.0 billion dollars and 400 millions books published.

Michael Jordan was cut from his high school basketball team. His coach justified the cut by pointing out that Michael had little or no potential.

Colonel Sanders of Kentucky Fried Chicken fame had a hard time selling his chicken at first. In fact, his famous secret chicken recipe was rejected 1,009 times before a restaurant accepted it.

Walt Disney was fired by a newspaper editor because, “he lacked imagination and had no good ideas.”

The Take-away?
So, what’s the point of these lesser-known examples of perseverence? I suppose it is to realize the absolute importance of persistence… the value of staying the course; of not giving up too soon.

In our previous newsletter we referenced data indicating that, on average, it takes five-to-twelve contacts to make a sale; yet 80% of sales people make three-or-fewer attempts and then give up. Thus, the vast majority of opportunities are siezed by just 20% of the sellers.

Evolution?
Let’s also think about the buyers and how they may have evolved. Based on the statistics above, most sellers make one or two attempts to reach a potential buyer, and then they move on (give up!).

So, has the potential buyer “evolved” to somehow realize that by simply ignoring the first couple of queries from a seller, there is an eighty-percent chance that seller will simply go away?

If you’d like a few more surprising examples of the importance of persistence, consult this list of 50 well known successful people who didn’t start off quite so well.

Given that on-site programs can involve costly and disruptive travel and down-time, and that many sales teams are geographically-deployed, we have developed highly-interactive and effective methods of conducing remote training programs, which sales leaders and sales teams of all types and tenure levels have rated as national best.

People need development if they are to grow and succeed. Our virtual programming enables people to entertain fresh ideas, share best practices, and continually improve their skills without the need for costly and disruptive travel.

Watch both performance and engagement levels soar as your team refines their approach with a spirit of continuous improvement.

Our versatile facilitation services can help you organize and conduct dynamic events or meetings in which people are actively involved and engaged.

On-track discussions, innovative activities, action planning, and clearly-identified next steps are all part of our approach, which will help your functions take on a new level of effectiveness, saving time while enhancing the experience for all.

You can also opt for support with pre-event planning, which will help you to take an outside-the-box look at program structure and inclusions, and also help to ensure alignment with strategic goals and objectives.